This morning at Coogee Bay wreaths of kelp wrapped around my legs in the foamy wake of the waves. Breezy day, cool grey-blue ocean. I wandered up the beach to the sea pool. I swam across and then let my feet find the mossy bottom of the pool in the shady murky part under the battered concrete wall where the waves crash. Squishing squelchy toe pleasures.

Afterwards I bought a coffee at 'chish 'n' fips' and sat at a table near the park reading Claire Nashar's first book of poetry, Lake. A reading experience of being deeply and pleasantly 'fluoresced'. 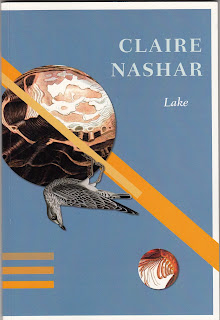 As Ann Vickery says in her thoughtful and detailed introduction to the book - "Lake is a stunning debut and I expect it will itself become both impetus and node for many ... leaving a mark that is simultaneously touching, fecund and mobile."

The lake is Tuggerah Lake on the Central Coast of New South Wales. Claire includes a simple map of it that's mainly just lake and sea. The map was drawn by the cover designer Zoë Sadokierski. And the poems are like this map - mostly with just enough information, underwritten, notational, sparse with plenty of air around them. Some pages are exceptionally minimal. Some a little more 'traditional' (if that's the word - maybe 'approaching conventional' suits them better...). 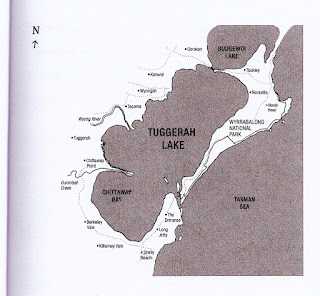 Lake is dedicated to Claire Nashar's grandmother, Beryl, a geologist who spent her life researching rock composition in New South Wales. While it's a poetic account of the day the Nashars buried a loved family member it is also a profound tribute to the lake itself.

It is a beautiful work that is attentive to, among many other things, ecology, to both the effect and affect of human activity on a 'land/lake'. In her brief (three paragraph) precise preface Claire acknowledges "Long before us and long after us the area [Tuggerah] is home to the Darkinjung, Awabakal and Kuringgai peoples." She also says that she initially called this cluster of poems a 'necro-geography' because of its interest in the dead things of the lake.

This is a complex, meticulous book that uses unobtrusive yet utterly original experimentation to realise its intentions. I'll let Claire Nashar tell you more : "The poems in this book do not always start and end on discrete pages, and none have titles, although sometimes the index points a way. Muddle-headed pronouns, tenses and other grammatical disagreements reflect the porousness of subjecthood, action and time. Such disagreements are always fluoresced by subjects like love, death and life. Where there is blank space in these poems, as with most blank things, it is not empty" 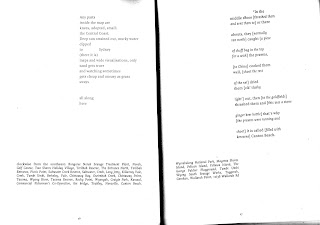 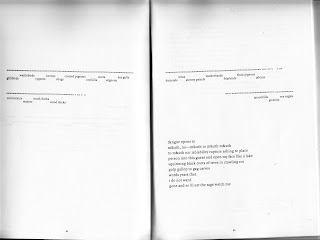 Published by Cordite Books and available here
as usual, click on the pages/images to enlarge them