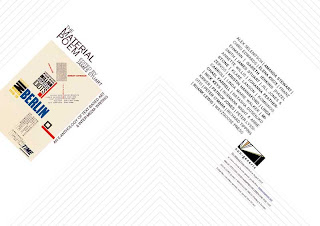 The Material Poem edited by James Stuart
is now available as a free download at
non generic productions.

Sydney poet Adam Aitken covers the bookshops
in the first week of August : 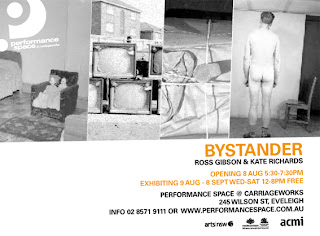 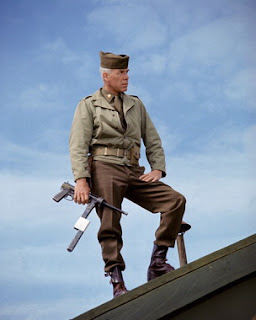 
The Material Poem is a new e-anthology, edited by James Stuart and published by ‘non-generic productions’. It features the work of some 28 Australian poets, artists and critics, all of whom are engaged with poetry, and more broadly language, as a material form. It showcases the vibrancy of experimental writing practices in Australia, demonstrating how writing functions outside the purely literary. The Material Poem will be launched by Katrina Schwarz, editor of Art and Australia with new-media performances and an experimental short film screening.


Gary Sullivan, self-described poet, cartoonist, loudmouth is the creator of a comic strip called Elsewhere. Three copies of this funny, fascinating, off-beat comic that I’d ordered, arrived in the mail
yesterday and I read them, cover-to-cover straightaway. I highly recommend these amazing light-hearted, funny and witty, intelligibly critical, poetic and personal comic books. Elsewhere No 2 is a collaboration with poet Nada Gordon. It's 24 pages of multi-cultural images drawn from a walk up Coney Island Avenue, Brooklyn. The comic's text is by Nada Gordon, modelled on Frank O'Hara's Second Avenue and written from notes taken on a bus trip down Coney Island Avenue in the opposite direction. As the song says, it's 'a great big melting pot' and it's wonderful too. 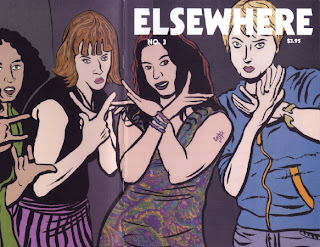 Gary Sullivan also has a nicely-illustrated essay in progress about Joe Brainard’s one-off collaboration with the poet Robert Creeley called Class of ‘47 on his blog, also called Elsewhere.You can order copies of the comics there as well. 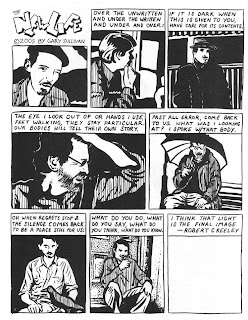 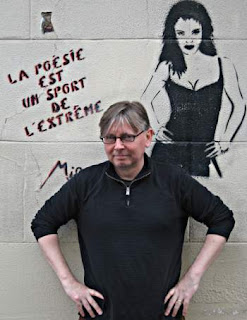 Gary is a participant in the Humpo feature edited by Rachel Loden and K.Silem Mohammad in the issue I’ve recently edited of Jacket magazine.

remember, dear visitors to the deletions, that you can simply click on the images, especially ones like the comic strip, to see larger size versions 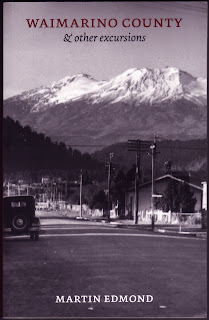 Martin Edmond was born in Ohakune, New Zealand, the town in the cover photo of his new book Waimarino County & other excursions. The photo of the main street of Ohakune with Mount Ruapehu looming over it was taken by B.V. Davis in 1938. This book is an enthralling collection of discursive essays and short prose works concerned with memory, travelling, imagination and dreaming, identity and ‘other excursions’. To quote from an early part of the book ..when we had moved from Huntly to Heretaunga, and my father suffered his first breakdown and my mother announced herself as a poet, it came to be time for me to leave home and I did so on the Limited Express...A description of that formative train trip follows, and Martin's mother’s recent announcement draws attention to the fact that she was the well-known New Zealand poet Lauris Edmond. After finishing undergraduate and postgraduate degrees in English and anthropology Martin briefly worked as a junior lecturer at Victoria University, in Wellington. Then he joined the avant-garde theatre group Red Mole, touring New Zealand, the US, Mexico, UK and Europe. Martin moved to Sydney in 1981. He currently lives in Summer Hill and works as a writer and a taxi-driver. He keeps several blogs including the taxi-driving one, cleverly named dérives.

I mentioned Martin’s recent book Luca Antara : Passages in Search of Australia here on the deletions in January this year. 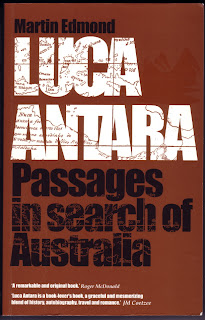 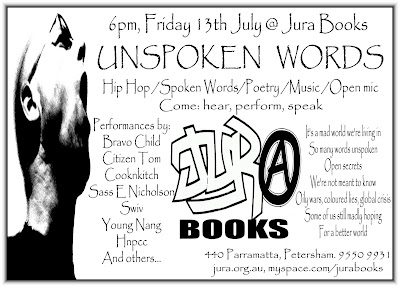 A Question of Fear 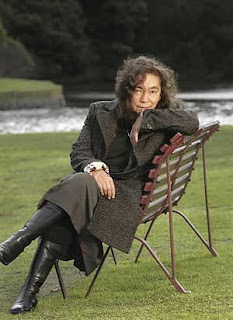 Alexis Wright is a Waanji woman from the southern Gulf of Carpentaria. Her latest book Carpentaria won the 2007 Miles Franklin Award. She has worked extensively in government departments and Aboriginal agencies across four states and territories as a manager, educator, researcher and writer. Alexis was coordinator of the NT Aboriginal Constitutional Convention in 1993 and wrote Aboriginal Self Government for Lands Rights News, later quoted in full in Henry Reynold’s Aboriginal Sovereignty, 1996. She is also the author of Grog War and Plains of Promise

You can listen to this powerful lecture or download the transcript,
courtesy of ABC radio, by clicking here

The riches, the riches

On the train in to Central Station, I’d been reading Cinema Eden - a selection of essays by my favourite novelist Juan Goytisolo. When I say ‘favourite novelist’ I mean it. I don’t read many novels but I adore Juan Goytisolo’s prose. I like his critical writing, his novels, memoir - all of it. Since I first read Landscapes After The Battle in the late 1980s I have read everything he has written that I could find translated into English. 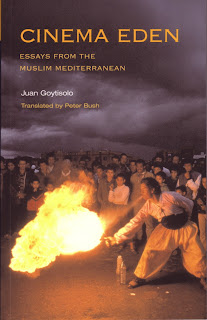 Anyway, after bombing out (or, at any rate, feeling that way) of my late-morning interview at the Arts Ministry, I decided, perhaps inspired by Juan Goytisolo’s small book, to uplift my general engagement and, hoping for cultural enrichment, to walk down to the Art Gallery of NSW to see The Arts of Islam.
But, after leaving my coat and bag at the hat check, I decided to have a look at the current Anselm Kiefer exhibition first. I’ve seen individual pieces by Anselm Kiefer before and when my partner, Jane Zemiro, and I were in Berlin some years ago we visited his ‘library installation’ at the Hamburger Bahnhof.
At the NSW Art Gallery the Kiefer artworks are strewn, Sydney-style, across various locations. As you leave a down-escalator you are sort of thrown onto a wall with a large truncated concrete staircase that was, according to the wall-didact, inspired by an Ingeborg Bachmann poem. This powerful work seems incidental to the traffic of “art-lovers” looking for the toilet or heading to another show, and the same goes for the rest of the installation. It feels, slightly horribly, a bit like an undisciplined circus. Kiefer’s interpretative sculptures of three of classical mythology’s goddesses are placed like decorative objects in a touristic pot-pourri shop right next to the cafeteria - in fact, they seem to be in the cafeteria as the staff clatter around them with food and drinks on trays and are stopped to answer location queries by lost “art-lovers”. The fallen palm-tree that accompanies Kiefer’s analysis or quest of the relationship between a fecund earthy field and its dire heavenly aspirations lies in the busy corridor between his large wall panels and a show on Picasso-et-al and modernism. Perhaps the curator here sees this possibly obstructive representation of Palm Sunday, and Jesus Christ's triumphal entry into Jerusalem, as belonging somewhere between modernist abstractions and passageway crowd management. Frankly, no matter what you think or feel about Kiefer’s work, the Art Gallery of NSW’s presentation of this sombre and serious artist is risible. 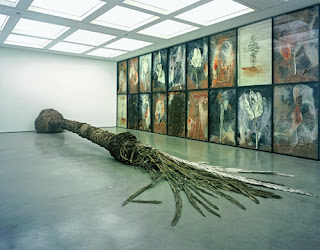 Seeing Anselm Kiefer’s large installation in Berlin was an utterly different experience. There, you could take this artist seriously. And you could surrender to his investigative art, whether bleak or wry, affected or genuine. The space was large enough, quiet enough (no cafeteria or bookshop within cooee of the artworks) to respond in whatever way you wanted. 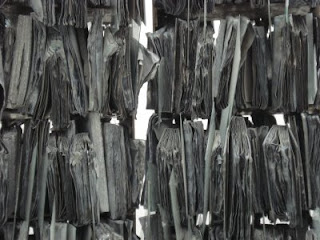 Berlin's Museum for contemporary art opened in the former railway station, Hamburger Bahnhof, in November 1996. This gave the Nationalgalerie (National Gallery) the first permanent home for its collection of contemporary art. The Hamburger Bahnhof was built 1846/47 in late classicist style. It is the only old terminal station building remaining in Berlin. For forty years it served as the terminal between Hamburg and Berlin until it was closed in 1884. And (already) in 1906 it was found to be too small for a station and was converted into a museum of traffic and building. Located in "no man’s land" between East and West Berlin, the Hamburger Bahnhof remained unused after the Second World War. Successive restoration began only after the GDR handed the building over to the City of Berlin in 1984. The war-torn building was inaccessible after 1945. It stood empty for many decades and
in 1987, the Hamburger Bahnhof was assigned to the Stiftung Preußischer Kulturbesitz (Foundation of Prussian Cultural Heritage). In 1989 the competition for the conversion of the building was won by the architect Josef Paul Kleihues, a museum specialist who designed an ideal concept for the multi-functional usage of the new museum. After reconstruction and modernization the museum, as noted above, opened in November 1996. The first major exhibition followed in 1997 with works by Sigmar Polke.

To end more positively on the riches of Wednesday, I'll direct The Deletions' visitors to Peter Campbell's article on these Palm Sunday works by Anselm Kiefer in the LRB earlier this year, and also say that the exhibition of the arts of Islam is excellent in spite of the expected and traditional absence of women (apart from two images - in a Maghrebi and an Afghani miniature) and even if this avid “art lover” had to crick and crane to read the poorly placed labels. 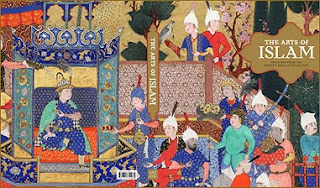