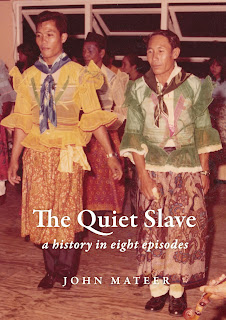 Writer, poet & curator, John Mateer will be visiting Canberra and Sydney in April with a new book, The Quiet Slave. The book is the outcome of a two year long research project conducted as part of future recall at spaced2.

The Quiet Slave is an historical fiction set in the early 19th Century that describes the first years of settlement on the Cocos-Keeling Islands, an atoll – now an Australian Indian Ocean Territory – midway between Perth and Sri Lanka. The events are seen through the eyes of Rosie, a female Malay slave belonging to the controversial English colonial Alexander Hare. Hare employed John Clunies-Ross until conflict between them ultimately led to the abandonment of the Malays on the island for the next 140 years, during which period the islands belonged to the Clunies-Ross dynasty. Beyond simply describing the process of settlement of the uninhabited atoll, Rosie's story is an insight into the origin and lives of the slaves who, like her, were brought from various parts of the 'Malay Archipelago' and into the complex circumstances of the last days of Western slavery.

Conceived over a two-year period in the rural Western Australian town of Katanning and on the Cocos-Keeling Islands, the book is published in John Mateer's original English and the Malay translation of the Singaporean Nur-El-Hudda Jaffar. It is illustrated with a selection of photographs taken during one of the United Nations' decolonization mission to the islands in the 1980s.

A brief interview with John Mateer about the project -

For a seminar on the project at the Centre for Writing and Society
at University of Western Sydney
on Friday morning, April 17th click here

John Mateer has published several books of poetry & prose. He convened the 2013 symposium The Ambiguity of our Geography at Perth Institute of Contemporary Arts, as part In Confidence: Reorientations in Recent Art, the Indian Ocean-focused exhibition he curated for that institution. Currently he is an honorary research fellow at the University of Western Australia, researching traces of the explorer William Dampier's voyages in Robinson Crusoe and Gulliver's Travels. 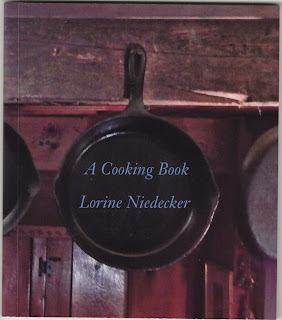 Lorine Niedecker's xmas gift to a friend, Maude Hartel, in 1964, A Cooking Book is a warmhearted humorous book of short (and typically 'whittled down') poems about the uses and preparation of certain foods, especially rutabaga (known in Australia as 'swedes') and sauerkraut. With plenty of advice and anecdotes from 'Al' and various asides from the poet this is a booklet to cherish.

But Al seems to know
about cooking - he grew up in
the north woods near Paul
Bunyan and ate close to
the soil. He reads while he eats.

Away from the table: I eat
books.

It's published by Bob and Susan Arnold's Longhouse in Vermont.
Visit the site here

Liquor in food - sure,
pour wine over cabbage and
over almost anything. 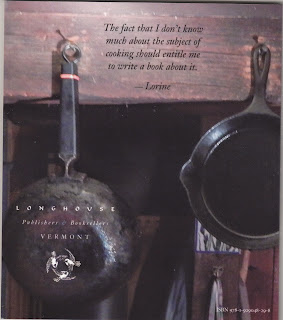