Sonnets are all the go, as they have been since the Italian sonnet (sonetto - ‘little song’) was introduced to English poets in the early sixteenth century and was to become gradually ‘anglicised' and altered and eventually known as ‘Shakespearean’. As poetry-reading visitors to the deletions already know (and so may wish now to skip straight to the poems and books I'm going to mention), sonnets used to be a neat lyrical form that used various rhyme schemes. (Italian sonnets had some repeated rhymes and used iambic pentameter). The final couplet usually functioned as an epigram, summarising the moral drift or giving some kind of twist to the poem. Rhyming has been ditched by many contemporary sonneteers, as has the epigram, and formal traditional rhythm. Now, with the sonnet form in mind, you can write a poem that turns out to be fourteen lines or two stanzas of seven lines and you can fracture and indent eccentrically and it can be a ‘sonnet’.

Two sonnets by Canadian poet Anne Carson in a recent edition of the London Review of Books stretches the form beyond the form. They seem clever but perhaps they’re over-clever, intense examples of dry dedicated experimentation? Then I guess if mainstream international journals like the LRB publish sonnets like this, then poetry readers might have caught up with poetry writers …
Posted by pb at 4:49 PM 1 comment: 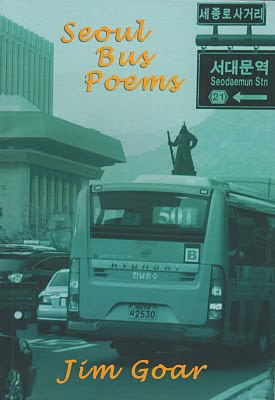 Jim Goar very generously sent me a copy of Seoul Bus Poems and, staying indoors on this misty, rainy Sunday afternoon I found a lot of pleasure in reading Jim’s poetry. Here are a couple of poems from the book and you can read some others in the current Jacket.

There is a list of names
outside my window.

In Changsa my name.
By noon the wall was
white again.

Nouns hang
from globes outside

my window. a list
of names outside
my window.

my name. the wall was
white again.

Nouns hang
from globes outside
my window.

the wall. a name
was white again.