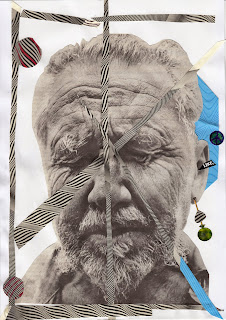 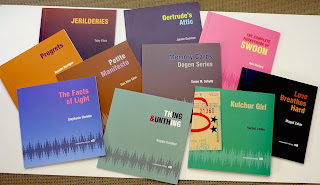 I’ve been asked to say a few words about designing the deciBels series, and specifically to talk about fonts. So I ask myself, what is a font? Keith Chi-hang Tam, in Digital typography: a primer, explains that “a digital font … is a piece of computer software that contains a collection of vector ‘drawings’ along with spacing and kerning data that can be accessed through the keyboard.” As he points out, “these ‘drawings’ are often letters which, when combined sensibly, form meaningful words.”

Now, there are two fonts — two “collection[s] of … drawings” — used to form meaningful words in these books. The body typeface — the font used for the poems themselves — is Adobe Minion Pro. Minion was designed and drawn by Robert Slimbach for Adobe Systems in 1990. It’s a serifed typeface in the “classical tradition” — which, according to Paul Caputo writing in the IBD Blog, is “designer code for ‘It was designed to look like pretty much every other serifed typeface out there.’” Caputo goes on to say that Minion “is one of those typefaces that only a typographer could love (not that other people dislike it; they just don’t notice it). If Minion were at a high school dance,” he says, “it would sip punch with its back against the wall, trying not to make any sudden movements …” “There’s nothing,” he adds, “to dislike about Minion. Sure, typographers who like to argue about the tiniest of details will say things like, ‘The slight upward angle of the cross-stroke of the lower-case e is too whimsical,’ but it’s expertly designed to maximize legibility, and the practical advantages to most designers are immeasurable.” Minion contains more glyphs than most other fonts and comes in multiple weights as well as old-style letterforms and small caps. This makes it flexible, which along with its legibility helps it to blend into the background, letting the content take centre stage.

It’s common typographic practice to team a serif body typeface with sans-serif headers, and that’s what we’ve done here. For book titles, author’s names, poem titles and so on, we’ve used a font called Swiss 721 — Black Condensed for book titles, Bold Condensed for authors’ names. Swiss 721 is really Helvetica under a different name, with a few very subtle variations. Helvetica, in fact, means Swiss. Swiss 721 was cloned from Helvetica in 1982 by the Bistream type foundry. I may of course be imagining things, but I like to think that its condensed weights are slightly more elegant than those of Helvetica, which is why I suggested using it, but Swiss and Helvetica are essentially the same font. So, what can I tell you about Helvetica?

Helvetica was designed in the late 1950s by Edouard Hoffmann, director of the Haas Type foundry, and drawn by Max Miedinger under his guidance. They were trying to improve on the popular late-nineteenth-century typeface Akzidenz Grotesk, from the Berthold type foundry. Personally, I’m not sure they succeeded, but a lot of other people seem to think they did. Four years after its release as Haas Neue Grotesk, Hoffmann and Miedinger’s font was reworked for the Linotype Company and re-released as Helvetica, which, during the 1960s, displaced Futura as the most popular sans serif typeface in the world. Since then, Helvetica has become ubiquitous. Linotype’s restrictive licensing policies are sometimes blamed for the large number of unauthorized copies, and may also have played a role in generating genuinely re-worked versions like Swiss 721. Stephen Coles, writing on the FontFeed website, says that “there are many reasons why Helvetica is so widespread, the most obvious being that a few weights have been bundled with the Mac Operating System for years. It is arguably the most respectable of the ‘default’ fonts. But it’s also used because it’s a safe, neutral choice. For many purposes, typography is more about content than style. Fans of Beatrice Warde will tell you that typographers should communicate without distraction. Helvetica, with its simple, unadorned forms, is the perfect crystal goblet. Even its ubiquity contributes to its neutrality — letters so common they become invisible.”

So, Swiss 721, to sum up, is the market-driven clone of a collection of drawings whose aim is to be invisible.

I should explain at this point that although the design and typography of this first deciBels series are attributed (inside the books) to me, the design in particular was collaborative. When Michael first told me about his deciBels idea, and explained that he’d asked Pam — and she’d agreed — to edit this first series, I seem to remember Mike stipulating some kind of design continuity for the set of 10 books, and I certainly remember him telling me that Pam had some definite ideas about the design. It’s part of Michael’s brief for the deciBels series — not just this one, but future series as well — that “form and genre are open and up to the editor, as is the design and format.” It was Pam who suggested a small, square format and type-only covers that were simple and uncluttered. I came up with some font suggestions, a few dummy layouts for the covers, and various ideas for a deciBels motif, and Pam chose those she liked best. 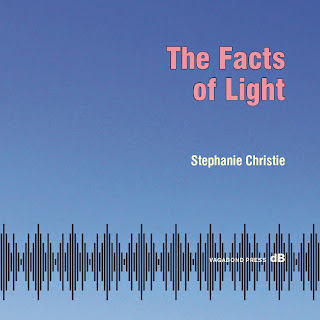 I constructed a basic shell for the covers early in the piece, and as manuscripts arrived we began selecting colours. I made the initial choices, and some of them were more or less rational: the cover of Stephanie Christie’s The Facts of Light is a photograph of the sky looking from Bondi toward New Zealand, the musk-stick pink and cherry red of Ann Vickery’s The Complete Pocketbook of Swoon are, potentially at least, reminiscent of school-yard crushes, Toby Fitch’s Jerilderies may be bush colours at dawn or maybe bushfire colours at midnight, and Rachel Loden’s Kulchur Girl more or less chose its own colours: those of the ticket documenting Rachel’s attendance at the Berkeley Poetry Conference of 1965. More often I chose instinctively, in ways I’d rather not analyse, and my choices were then worked over with Pam, either by email or at my computer. Pam, I discovered, is a skilled tweaker, with a fine eye for subtlety and detail — very easy to work with, too. The only difficulty I encountered, in the various sessions we had together, was deciding what to have for lunch. 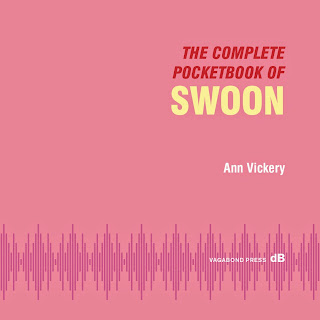 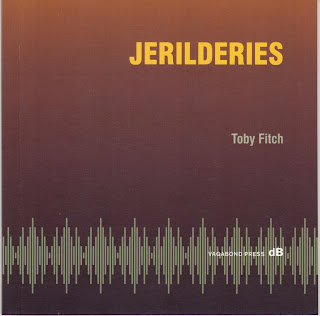 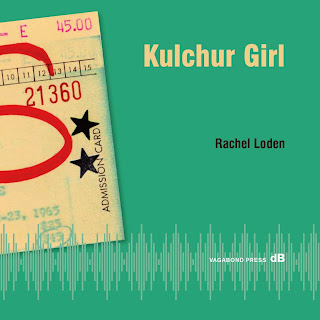 The poets also collaborated (knowingly or not) on the internal design. It’s not my role to talk today about the contents of the books, but I will say — regarding what are technically called their “innards” — that from a typographer’s point of view, it’s been a pleasure to work on such a stylistically diverse range of books. If the fonts we’ve used — Minion and Swiss — do succeed in disappearing, or at least blending into the background, it’s partly due to the formal variety on display here, not only between books but often within them. One poet, Toby Fitch, typeset his own book using deciBels fonts and style sheets. He took liberties with the style sheets in keeping with the style of his poems, and I, too, found it necessary to adapt or augment our standard styles for other books in the series. You might notice, if you look closely, that all ten share the same fonts and so on — the same typographic style — but what you notice first, I think, is that their compositional styles are all different. That’s the visible part.

Coordinating a project like this is a huge job, so I might end with an appropriately huge thank you to Michael Brennan, who came up with the idea and went to a great deal of trouble to ensure that the end results were as good as they possibly could be, and that they were delivered on time, and to Liz Allen for organising today’s launch, for housing the books temporarily in her home, and for seeing to it that they make their way in the world. I’d also like to extend my warmest congratulations — to all ten the authors on their individual books, each of which is well worth celebrating in its own right, to Pam who chose them and to Michael who chose Pam to edit the first of the deciBels series. Let’s hope we see many more. 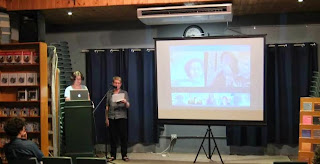 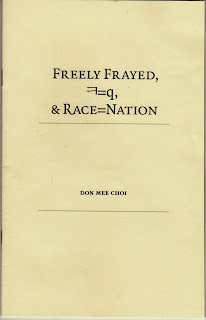 I want to draw attention to a short pamphlet recently published by Wave Books. It's called Freely Frayed,ᄏ=q, & Race=Nation and comprises three brief but powerful talks given by Don Mee Choi at a couple of conferences in the USA earlier this year. Here are two brief extracts from ᄏ=q - the central talk : click on the images to enlarge the text : 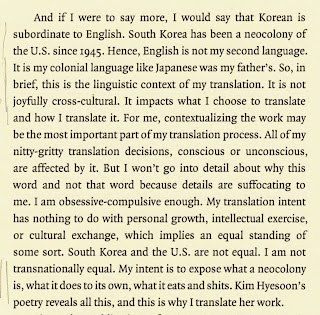 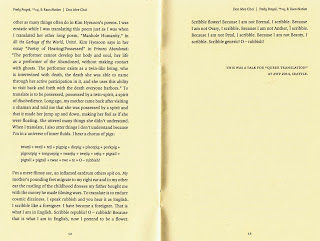 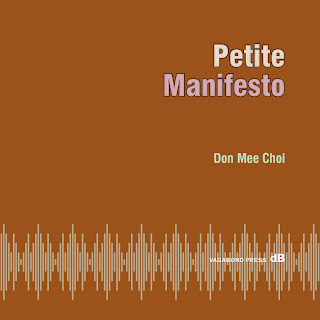