Jesse Glass of Ahadada Books is pleased to present
the meh of z z z z by Pam Brown. 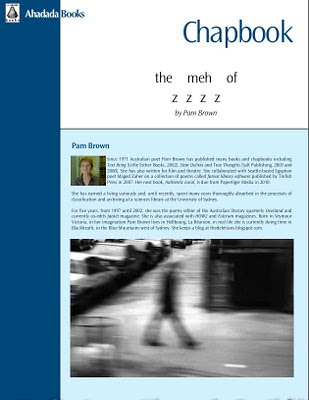 The cover art (click the image above to enlarge) is by Margaret Schnipper, a New York based photographer, film writer/director and visual artist.
See more of her work HERE

Ooops sorry about that. Bloody hell, the first time I have ever had to delete one of my own comments. Gives the impression something awful must have been said. But no, the braindead geezer just left his grateful comment on the wrong post.

(But I suppose if one has now entered the embarrassing phase of deleting one's own comments, where better to begin than on *the deletions*?)

Thanks. I am really pleased that you like those poems. And thanks for the link on your site.

I memorised Keats' well-known 'When I have fears that I may cease to be' which is probably now even more popular courtesy of 'Bright Star' (I haven't seen that movie yet). And the poem of yours was an old one I've loved for years now -

Nice talking with you, All good wishes, Pam

I love your new e-book and would join John Keats in being flattered by your memorization.

Memory is so beautiful, some nights it seems all one has left... and then one forgets, again.

Hi again Tom - I've pasted your original comments in here - looks a bit clunky ... but the best blogger can do

I've linked your blog 'Beyond The Pale' on my blog list.

It makes perfect sense somehow that you memorized that particular poem of Tom's, an amazing one. I can see the convergence.

Last night I read the whole chapbook, inhaled it. It's brilliant, like a glittery floating soap bubble of maya and enlightenment.

It rolls across the mind so blithe and lovely and devil-may-care.

I can never figure out how you do it!

Thanks for your great response to my poems. I really appreciae that.

Yes, I've liked that poem of Tom Clark's for years. In 1988 my co- writer, Jan McKemmish and I quoted it in our theatre piece. It has a continuum.... and when I started memorising a poem each month, some time ago, it cropped up again. It's a beautiful poem.

Let me share Rachel's talk bubble by echoing her wonderment at the apparent effortlessness of the poems in "the meh of z z z z". Appearances do deceive.

Memorization... interesting indeed. Three thousand years ago, according to some Homeric scholarship, the only poems that could "last" were the ones people memorized and handed down. Perhaps it would be a mercy if this were still the case. A sort of gleaning process.

Funny thing is, that's the only one of my poems (well, the only one of more than a few lines) I can still count on remembering word for word. Don't know if this says something about the poem or about the depletion of brain cell quantity in its author.

(I think it's that "continuum" in it which is the memory aid.)

Once upon a time I was (probably by mistake) invited to take part in a symposium for secondary school teachers on the teaching of poetry. An extremely well dressed Stanford professor brought up (approvingly, yet) Adorno's infamous comment about lyric poetry being impossible to write after Auschwitz. It was that kind of affair. One sat mutely, praying for any "against-the-grain" development. Finally it came, from a curious source. The then already ancient Robert Penn Warren, who had been slated to appear, was indisposed and did not... instead he sent a brief written statement, to be presented by the host in his stead. In the statement RPW lamented the abandonment of memorization as a teaching method, citing the regrettable disinclination of modern teachers to "intimidate" or "make students uncomfortable" by requiring them to memorize poems. You don't really "have" a poem, his statement suggested, until you know it by heart. But when you do, you have it forever.

It was the high point of the event for me (though I was a bit disappointed by the fact the statement had not been memorized but had to read aloud by the presenter).