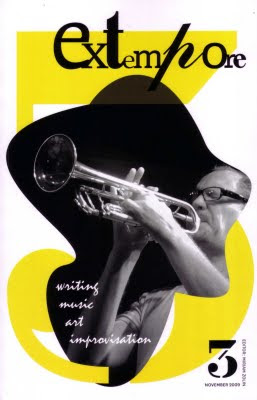 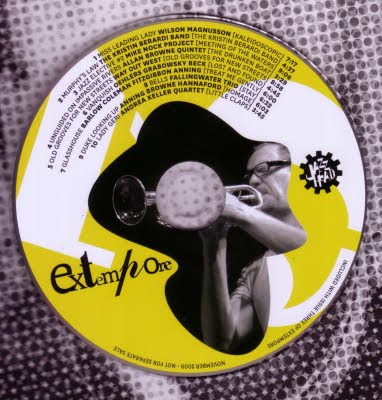 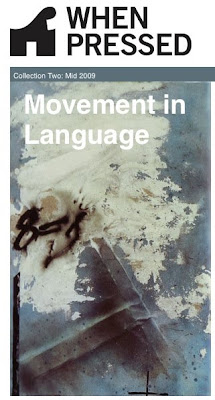 When Pressed - Movement in Language is up on the web.
Click here

Permapoesis said...
This comment has been removed by the author.
7:19 PM

i'd like to out the designer for the extempore3 jacket with cagean chance type – it's no other than ian robertson of ian robertson graphic art (melb), and he's also co-publisher of tree-elbow (formerly reverie press) publications, daylesford. ian and kris hemensley (collected works bookshop, melb) go way back with small press poetry capers.

apparently extempore is going great guns and looks like taking root as an ongoing journal. pity about the jazz (fickle personal thing) though. perhaps the publisher cld exchange the jazz bit with ecology and climate change action – then it wld be bonza!

hey, but why don't i just go away and do that myself?

in fact i will be calling for submissions very soon.

good idea, given that climate is always extemporaneous!

Oh, I haven't read the other one Pam, but Extempore is my favourite journal on the planet. And you know (even if others don't) that it's not because I'm in it. In fact it is the other way round, I am in it because it is my favourite journal on the planet. Not to everyone's taste, a free CD of Australian Jazz, improvisation as a major theme and so but I love it. And I have to say as well, Miriam is my ideal as an editor, calm, respectful, knows more than I do and pays actual money without a Government grant. I think they should have some Government money as a matter of balance, plenty of it goes to not-improvising big companies stuck in old modes so it would only be fair. Then again, sometimes I worry that by giving my stamp of approval I am in fact doing more harm than good. That's why I need an editor.

I don't know if it was you, Pam or someone else called Pam, but someone said over at Barbara Jane Reyes place the other day about the 'curatorial' role of the editor, with which I entirely agree. But a week or so later, the word 'curatorial' in that context of editorship gets passed on to (or just picked up by) people who use it slightly differently. It is a game of Chinese Whispers on the net. And you are very calm and probably don't care. Which is cool, I just thought I would let you know. It was probably like that in real life too, I imagine. Anyway, just marking time. Have a lovely evening.

No it wasn't me. Call me old fashioned but I think the context for the word 'curatorial' is visual art & its various genre. When I see readings described as having been 'curated' I think there's something a little pretentious going on. Even if they're ekphrastic readings held in galleries.
I'm not sure whether a magazine or a book can be 'curated'. Mostly, I do a basic slog, occasionally brightened by the flash of a new concept, on the magazines I'm involved with.