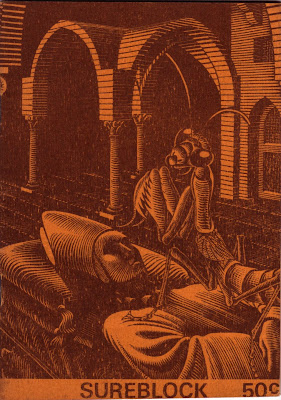 I’ve been scanning some old poetry book covers for my revamped web site. My very first book was a pocket-sized publication printed in clandestine, at night, on offcuts in a big offset printery in Melbourne where a budding-publisher friend of mine worked during the day. It was called Sureblock, a word that had come to me in a dream. The cover image was a detail from a picture by Maurits Escher. The little book was 12cm x 16cm. On the title page - a nicely anarchic instruction to ignore copyright and the first page carried a dedication to two outlaw cowgirls and a quote from Antonin Artaud that I often find myself agreeing with to this day, thirty six years later. 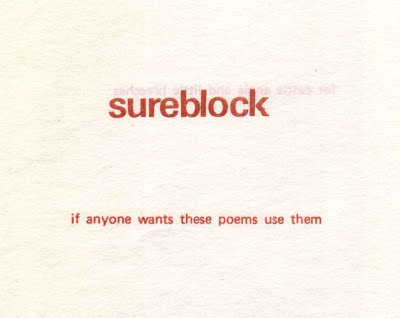 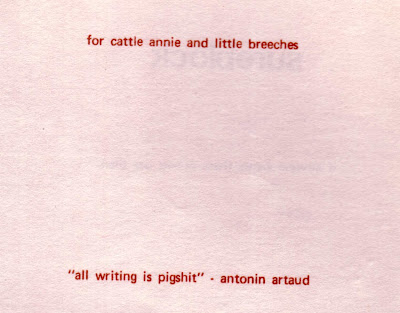 i often wonder what artaud would have done with the world wide web as it seems that 'it' rather than film would satisfy his idea of a perfect form for art. i have a newspaper clipping of him from 'joan of arc' one of the handful of films in which he acted.
he looked magnificent, all darkness and brood.

i think he was a gifted innovator, hindered of course by madness, but looking at the way he saw forward but couldn't get there himself, perhaps he wasn't crazy, just too early and too burdened...i guess you would have read sontag on him.

Yes - I read Susan Sontag's essay in the 80s - a decade after she wrote it - I remember her gist being that Antonin Artaud isn't obscure or irrelevant providing you only attend to his ideas - if you read his work, you're a goner.

And that his posthumous status as a modern classic has rendered his work ineffective.

I read Artaud when I was young and interested in everything provocative and a little crazy. (see what happens when growing up on a Queensland army bases!)