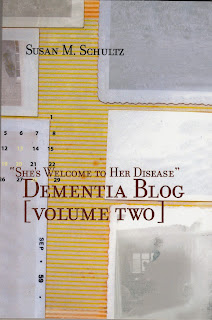 Five years ago I wrote about Susan Schultz's book Dementia Blog on 'the deletions'. You can find that blog entry here. Now, I have just finished reading the recently published Dementia Blog Volume Two, subtitled "She's Welcome to Her Disease".

This complex project records Susan Schultz's mother’s struggle with Alzheimer’s disease and Susan's life alongside and within that circumstance. 'Volume Two' follows the final stages of her mother's gradual surrender to this perplexing terminal disease.

Susan Schultz is such an intelligent, observant, inclusive writer that this book is rich, philosophical, graceful and capacious with so many intriguing poetic facets. It's often heart-rending, sometimes droll, always involved. It's also occasionally downright funny when she describes some of the unpredictable incidents and conversations between residents of the care home. She wryly encounters the absurd language of formal documents requiring payment, permissions and decisions that have to completed by the sufferer's next of kin. In this case, Susan is her mother's sole guardian. In the midst of a complicated jumble of emotions that are reportedly experienced by carers and relatives, the official forms seem ludicrously inane.

And then there are everyday incongruities like watching Planet of the Apes or Bonanza, lounging on the heavy generic healthcare-furniture in the TV room at the care home, juxtaposed with the tenderness and comfort of a soft toy dog that is reminiscent of a once-living pet that had met a sad end, and of Susan's mother, Martha's drawing of some perky terriers.

The general situation is complicated by Susan's living in Hawai'i and her mother's care home being located on the United States mainland, making efficacious responses and communication difficult. The daughter-to-mother telephone calls are poignantly minimal. The relationship inevitably depends on additionally stressful considerations like plane flights, hire cars, accommodation, places to eat while visiting.

Susan includes an array of thinkers and writers who have been engaged with either Alzheimer's disease or grief, mourning or memory in their various ways as she traces the daily lines of her mother's life and decline. There's a critical dialogue with literary historian Oren Izenberg's Being Numerous - Poetry and the Ground of Social Life. There are scientific and clinical writers, there's Thomas DeBaggio's autobiographical Losing my Mind blending with lines from poet George Oppen, who died of Alzheimer's disease in the mid 1980s. There are literary figures - King Lear meets The Little Prince - and more poets - Chad Sweeney, Alice Notley, Susan Howe's That This, Albert Saijo, Norman Fischer, and even, briefly, Allen Ginsberg. There's the wisdom or solace of The Tibetan Book of the Dead which Susan's friend, Sina, gives her at the airport when she arrives for what will be her final visit to her mother (who is, by now, in a hospice) and which, later, Susan accidentally loses.

Then there's the beginning of the abject state of grieving. Susan conducts a 'shadow-talk about mourning' with the late French philosopher Roland Barthes (she recalls attending a lecture at the Sorbonne thirty years earlier but doesn't remember anything other than Barthes himself, sitting addressing his audience).

Susan, who says 'It's hard to believe in memory when you see someone lose it' finds her memories of Martha that she had not, until now, included in her blog that 'memorialized her forgetting'. She makes a list of short paragraphs, several pages long, that fondly depict her well-educated, story-telling, witty mother's diverse, adventurous and lively life.

To quote Canadian poet, Fred Wah's endorsement of Dementia Blog Volume Two - "It is a poignant treatise on dementia written with grace and compassion, as well as a story that honors death and dying with intelligence and art.” 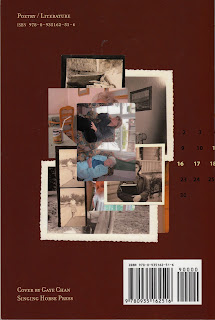 Both books are published by Paul Naylor's Singing Horse Press.
You can contact the press via the website.