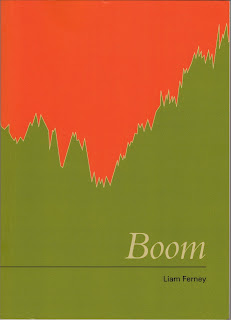 I had read the first eleven poems in Boom before they were collected here. In 2011 they were published in a neat chapbook called - how ironic is this for a poetry title? - 'Career'. I don't want to sound totally naive, but I didn't know for certain whether 'first eleven' meant something sporting though I had an inkling it did. So I actually looked it up - of course, it's a cricket team. Sport is an important component in Liam Ferney's poetry. A sports fan is happy being part of a crowd and in fact probably really enjoys the metaphysics of mass companionship so I think it's reasonable to say that Liam is not primarily driven by individual subjectivity. But reading his poetry I deduce that neither is he blinded by latest-literary-fashion-following tribal poetry behaviour. Perhaps living in Brisbane protects him from any such competitive, impenetrable and rarefied stuff. In other words, Liam probably gets enough of a dose of competition from being a competition spectator so his poems can remain characteristically distinct from a poetry mob.

However, there are influences and, rather than replicating them, Liam synthesises his influences. Among others, there are traces of the wonderful contemporary sonneteer Ted Neilsen, the bold vim of the adventurous 20th century-modernist travelling poet Frédéric-Louis Sauser whose well-known pseudonym was Blaise Cendrars, and, especially, the critical wit of the exceptionally vital and original twentieth-century Australian poet, John Forbes.

In fact Liam and his friend, poet Jaya Savige, read poems from John Forbes' last book 'Damaged Glamour' each day for a week during Liam's visit to Jaya at the poets' flat in Rome in 2007. Jaya told me in a recent email he is "certain [that way back in 1998-99] no teenager in Qld at that time, and few before or since, had read as much contemporary Australian poetry as Liam had." He also told me "Liam's first reading was in fact at the 'Warana Festival' - before it became the Brisbane Writers Festival (!) - WHEN HE WAS 14!!". Jaya went on to say "he was probably the most informed teenage poet of his generation in his state, and in hindsight, one of the most serious, committed teenage poets Qld's ever had." By his early 20s "Liam knew everything there was to know about contemporary Oz poetry, especially the 68-ers."

The first group of poems in Boom were written in South Korea and the blending of images and the sensuality of a hectic city is everywhere in them - like the poem 'sign on the dotted line' where many things are happening as the poet, drink in hand, watches tv and reports the goings on

Please explain? Okay. Google tells me a couple of language things - 'ajumma lugging cardboard' - 'ajumma' in Korean is a middle-aged woman, 'ajeossi stoop smoking' - 'ajeossi' is a middle-aged man. Michael Bay, as you know, is a high budget special effects action film director (he made Pearl Harbour, Armageddon, Nightmare on Elm Street and so on). The scooter accident where the boy dies must be horrific. It's all, together with Susan Sangster, a jumble of images in real life and on tv - the poet is drinking 'soju' -a Korean liquor that's a bit like vodka.

So you get the general crazy language mix and copious idiosyncratic pleasures of Liam's poetry. It's often a kind of freely-associated speedy world-travelling word salad of tumbling imagery and is exciting to read.

post-it notes flapping on the microwave:
you are your own cinema verite
all the rushes make the test screening


towards the denoument is a flourish - another sporting reference -

Liam's abbreviations, Korean and other languages-other-than-English terms, and colloquial acronyms will keep your search engines busy. For example, in 'Expecting Turbulence -

So although it can be puzzling figuring out some of these especially particular references, the poems provide so much imagery, humour, comment and movement that you can probably skip deciphering and enjoy the reading ride.

The same goes for the cricket references, hardly any of which I 'get' but that didn't stop me from thinking along and chuckling with Liam. But for actual cricket fans I'm certain it has many rewards. It's a local genre - the North Americans have poems about baseball, Liam includes cricket.

(The Secret Life of Them)

and in a different poem -

The High Court straight drives its ton /with the panache of a Bill Lawry knock, /tipping its bat to the bored crowds / swatting at flies with cultivated indifference. /Wiping the leather & green off their creams /they decide the occasion calls/for a bleary barbie on the banks/of Lake Burley Griffin.

that was the eighties nobody stayed for the dailies

and in an early millennium poem: - he asks 'who says the naughties can't be fun' (riffing on both 'nought' - zero and 'naughty' - wicked) :

(The Secret Life of Them)

These poems are crammed with ideas and popular culture like zombie movies, all kinds of songs, all kinds of movies, 1940s films' wholesome romantic misadventurers like Andy Hardy and Jimmy Stewart as well as the previously mentioned Hollywood action movies. There are many places, cities, odd behaviours, politics, food, language, there's daily news, tv characters, spies, artists and more.

I learned surrealism
from travelling exhibitions
then did my best to forget it
hoping I could come off
easy and casual
like terry towelling hats
or cold beer.

(some nights the heat)

Sometimes Liam's poems also display formal characteristics. 'Day of the Robots' is a pantoum or a villanelle (they're similar forms) - I think it's a pantoum - here are the middle quatrains -

Determined by a defective detective method,
the curbside lunch, meat pie and Coke,
weaves the fabric of R. Mutt’s famous joke,
trademarked like a familiar sentiment.

The curbside lunch: meat pie and Coke;
a checkout chick’s smoke break lament
trademarked like a familiar sentiment:
kitsch is truth as we know it.

In 'No Room At The Inn', Liam's lines of thought take the reader from definite impressions of Blaise Cendrars, he opens with a quote from the trans-siberian prose - we know we're momentarily in Paris, and then, with a turn that's similarly visceral to Cendrars', we are suddenly in an exotic east or in a suburb

where our stomachs rattle like cathedrals
shuddering shocked earth of an invading artillery advance.
Over a breakfast of champagne sherpa-ed from the Crimea,
Siberian pastries and unlikely fruit,
we expect good things to happen to good people:

Sometime later, after the long early dark,
with the help of a hitchhiking tundra tamer
we’ll shunt out of the station with a long march
of Chinese commerce boxed for trade in Ulan Bator.
Finally, a fan belt snapped on some post-industrial Leichardt’s Kombi,
as we slide our best silk stockings into place
that cough, more welcome than tubercular,
tolls the glory of our departure.

Boom is Liam's second collection after Popular Mechanics was published in 2004. In a recent interview he was asked "How long do you generally spend writing an individual poem?" He replied - 'Five or six years. The initial composition generally only takes about fifteen minutes (I write short poems) but the polishing and tightening and drafting can take years. One of the reasons I am able to balance a demanding professional career and poetry is the fact that I write predominately short, experimental lyric poems which I can scribble off in a lunch break or in the couple of free hours I get an evening. If I was writing The Iliad I might struggle to find some balance but I’m not.'

These poems, although carefully constructed, never appear laboured or contrived. They move as easily as songs.

A few years ago Liam was 'Cordite Poetry Review's' editor. He edited a feature of newly-written Ern Malley poems. I think that was a demonstration of his light-heartedness - his ability to be genuine while not taking things too seriously.

There is much more in the collection but I hope I've given you some idea, a sample of the multivalent range of Boom. Liam's is a punchy, a-d-h-d-y, original poetic energy that is steeped in urban imagination.

The final poem 'K61: Beijing – Kunming' - is a vivid diaristic record that transits various locations - China, Brisbane, the UK, Nigeria - and several years. Here is the final part of the poem -

The last line of Liam's bio note, which is also the last line in the book, says 'His passion is life.'

To quote from one of the poems -

and it is true that flowers are better than bombs